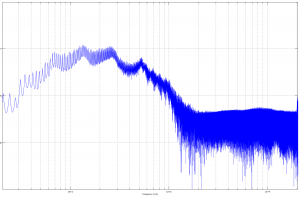 Gibson GA-4RE (Telray Adineko echo). This circuit has considerable leakage of dry signal. You can hear that as the first impulse. The first “dark” impulse can be considered the impulse response of the delay. Also, there is no erase “head”. The brush simply writes over the charge on each rotation of the disk. The repeated echo isn’t due to feedback, but progressive erasure. Use the entire impulse response for an accurate emulation.

Echoplex  (Original – pre “EP-1” Serial 709). A tiny bit of dry signal leakage. The tape impulse response shows up at about 360 ms. I am not sure why there is a sine sweep artifact in this IR (after the impulse). Possibly because the tape transport is so unstable, or perhaps interaction with the bias oscillator? 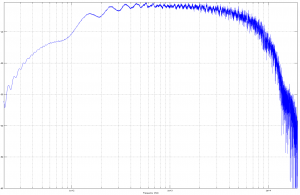 Roland Space Echo RE-201. Much cleaner compared to the previous two devices. No way to turn the dry signal off (perhaps my Space Echo is in need of repair?). 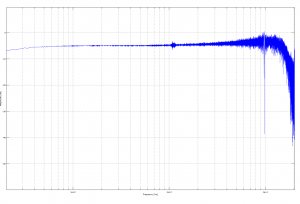 Bright Analog Delay Pedal. A modern CCD (charge-coupled device) delay. There is a bit of ripple in the passband (could be a Chebyshev I filter?) which caused a noticeable resonance after multiple repeats. 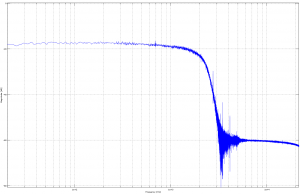 Dark Analog Delay Pedal. Another CCD delay. This one has a rounder, smoother filter response (possibly Bessel?), so no coloration after multiple repeats. Sharp rolloff at 2k for CCD aliasing rejection. You can see the signal leakage as a -60dB signal above 3k.

A PD echo patch with convolution in the feedback 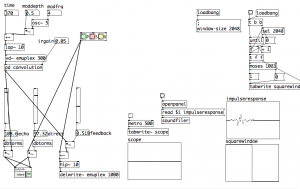